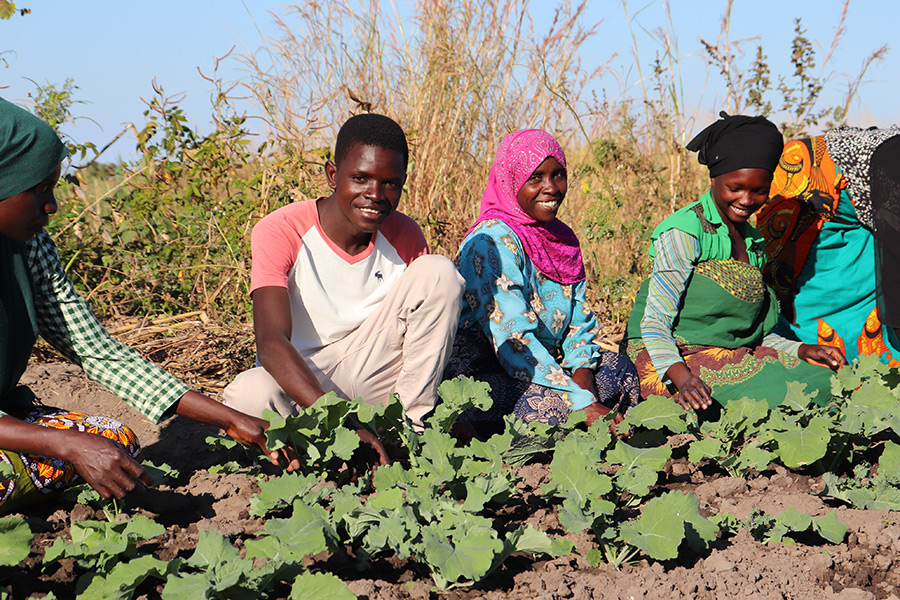 Coming from Chimkwenda village in Traditional Authority Malengachanzi in Nkhotakota district, Phembele Village Savings and Loan (VSL) group is a Community Based Farmers Organisation with a membership of 25 people; 7 men and 18 women.

The group was founded on 5 September in 2020 through the Poverty Reduction of Vulnerable Beneficiaries through Community Based Financial Organization and small scale Enterprise Development (PROVED) project which is being implemented by DAPP Malawi in the district under the Financial Access for Rural Markets, Smallholders and Enterprises (FARMSE) programme. The program is funded by IFAD via the Ministry of Finance.
The group said they learnt about VSLs through a Community Assistant working with DAPP Malawi who introduced the VSL concept, working together and establishing group businesses and linked them to formal financial institutions in order to access loans.

With expectations that they will improve their households’ income through individual and group businesses; be able to access loans from reputable financial institutions, the group came up with a constitution as a guiding tool on how to run their VSL and agreed that each member will be expected to buy shares at the price of 200 to 1000 kwacha.

In their first cycle, which ran from September to December 2020, the group raised about 185 thousand kwacha through shares buying, profits realised from businesses and loan interests from the group members. Currently, the group has cumulative savings of over 600 thousand kwacha.
As a group, they are currently running two businesses, selling fresh fish and vegetables which they grew in their garden.
Phembele VSL also indicated that apart from learning about the VSL concepts, the project has also opened their eyes to practice conservation farming as they are able to produce organic manure for their gardens.

The group has drafted action plans to save and generate enough profits from their activities so that they can purchase a motorbike for easy mobility and use it as a source of income to the group. They have also been linked to FINCA, a formal financial institution through which they can access loans as a group and as individuals. 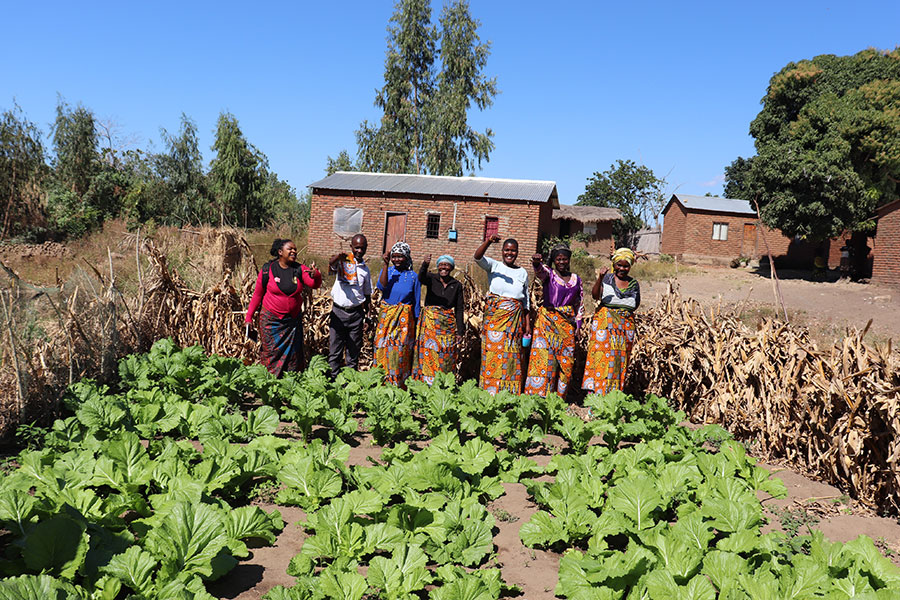 Nkunkhu Community Based Farmers organization is a 24 member group of male and females that was founded on 4 January 2017.
The group was established with the common understanding that the members will join forces to save money through buying of shares and be able to borrow the money from the group at an interest in order to improve their household incomes through small scale businesses.

From Traditional Authority Malengachanza in Nkhotakota district, Nkukhu is one of the Village Savings and Loan (VSL) groups that are working with DAPP Malawi in the Poverty Reduction of Vulnerable Beneficiaries through Community Based Financial Organization and small scale Enterprise Development (PROVED) project being implemented under the Financial Access for Rural Markets, Smallholders and Enterprises (FARMSE) programme. The program is funded by IFAD via the Ministry of Finance.

During one of the monitoring visits, the group narrated that their expectations for accepting to work with the project in November 2020 were that they will be able to access loans through DAPP Malawi, receive livestock on pass-on loan schemes as well as farming tools.
The group welcomed the idea to work with the project and attributes a number of successes to the project, which include financial literacy, linkage to formal financial institutions, ability to draw a vision and action plan as well as group cohesion through their group businesses and social welfare activities.

In their previous cycle which ran from January to December 2020 the group accumulated about 620 thousand kwacha while in the current run they have already saved 680 thousand kwacha mid-year.

With what they have learnt through the project, the group has set up an action plan and have a vision that each and every member will have an iron sheet roofed house by 2024 and they want to own a maize mill by 2027. To achieve these, the group has a constitution put in place and has set their share value at 500 to 2500 kwacha for each member compared to the previous cycle when everyone could pay 200 kwacha to no limited amount.
The group is also running businesses which include selling fish, growing and selling vegetables and groceries which are sold among members at a profit and they have already started buying iron sheets which will be distributed among members in the near future.

On access to formal financial institution, the project has connected Nkukhu CBFO to the National Economic Empowerment Fund (NEEF) through which they will be able to access loans in order to boost their businesses. 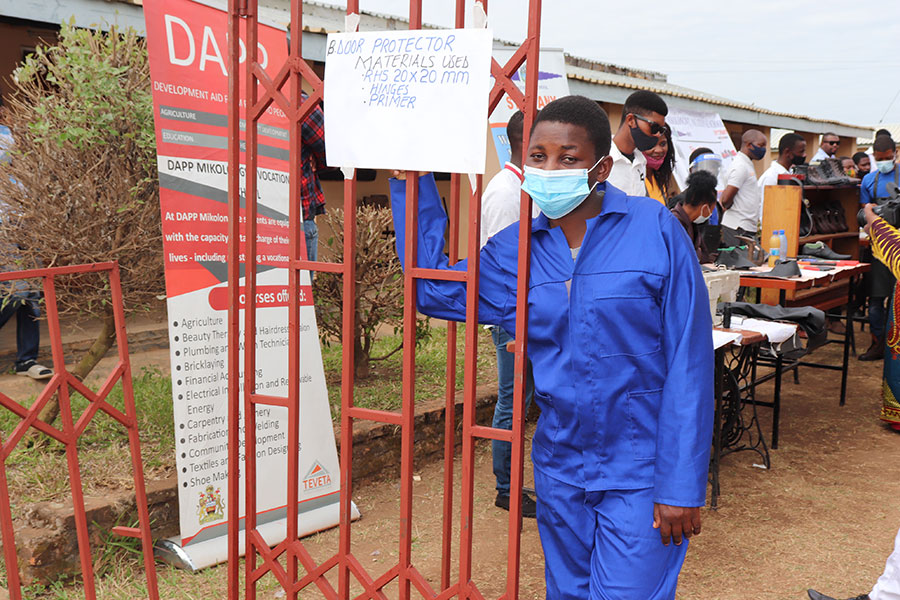 Hendrina Khutula is a student at DAPP Mikolongwe Vocational school who is advancing her Welding and Fabrication skills at the school. She was trained at Milonga Vocational school in Thyolo district where upon completion she received start up tools and established a welding business at Goliati Trading centre in the district.

She said it was this attention that drew customers for her as it seemed appealing to the people who were looking for welding and fabrication services.
Hendrina is currently advanced her welding and fabrication skills which will enable her to produce more and advanced materials.
With an advantage of already existing customers, Hendrina says she looks forward to continuing her business upon completion of the training at Mikolongwe. 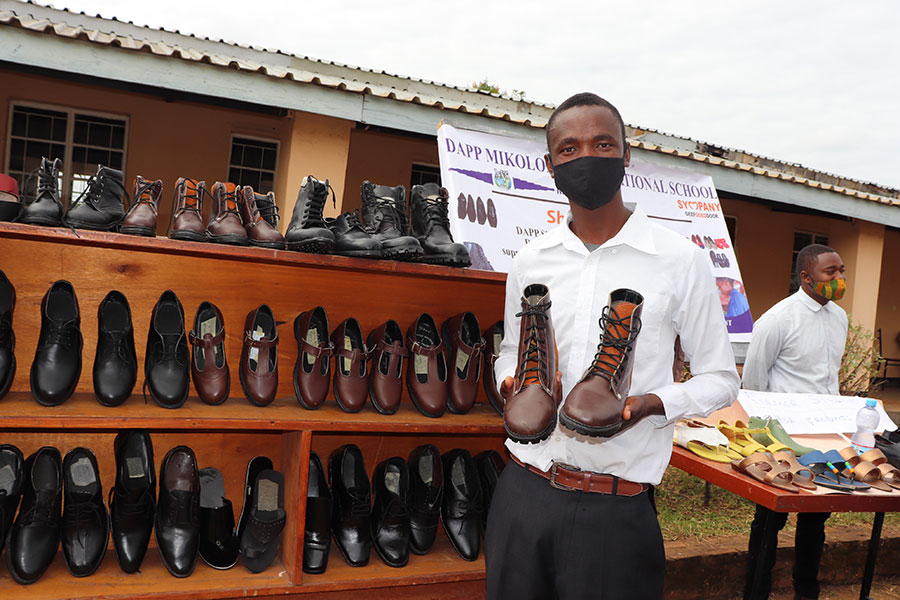 Mark Ndhlovu is a Cobbler and Shoe making student undergoing training at DAPP Mikolongwe Vocational School. Coming from Ndhlovu village in Traditional Authority Mzikubola in Mzimba district, Mark was enrolled at DAPP Mzimba Teacher Training College Satellite Centre that had been established to train youth with the vocational and entrepreneurial skills.

Upon completion of their six month training, Mark was among 8 students with outstanding performances that were selected to be further trained at Mikolongwe Vocational School.

He said before joining the Cobbler and Shoe Making course he was just staying at home and keeping goats. He says his plan is to open a shoe making business when be goes back to Mzimba. "I would like to establish my shoe making business when I go back to Mzimba and because I am at an advanced level of my training, I will be able to make shoes of good quality," he said.

The Cobbler and Shoe Making project is one of the courses being offered at DAPP Mikolongwe Vocational School. The school trains youth in both formal and informal training and has to date trained over 10,600 youth in Malawi.

Based in Lilongwe Area 23, Kondwani Majiyaheni is a 33 year old man who originally comes from Gambura village in Traditional Authority Katumbi in Rumphi district.

He is one of the graduates from DAPP Mikolongwe Vocational School who was trained in Welding and Fabrication course in 2011. Having sat for his Malawi School Certificate of Education, Majiyaheni was living in his home district where he said he used to practice subsistence farming and the returns were going straight to alcohol drinking in the local beer halls.

“I was just staying home after leaving secondary school and I had no idea what I will be doing until an opportunity came that UNICEF was looking for youth to support with training in Vocational training and I was one of the 44 beneficiaries. At DAPP Mikolongwe we learnt a number of things about welding and fabrication which included producing metal products like windows and door frames. With time and practice one is able to apply the knowledge and perfect the art.

After the training at Mikolongwe which was for six months, I joined a welding shop in Likuni township in Lilongwe where I was able to gain experience and because I had received start up tools I was to establish my businesses in less than 2 months,” he added.
Through his skills set, Majiyaheni is able to support himself and his family. Married with two children, he said he is able to pay school fees for his children and nephews.
“I bought land and constructed a house, I also managed to build and set up groceries shops back in the village through which my parents and relatives are able to support themselves from the returns,” he added.
Apart from the welding business, Mr Kondwani Majiyaheni said he has expanded his businesses to open a Liquor shop in Area 23 Township. Monthly, he is able to realize a profit of 150 thousand kwacha and that is considering that business hasn’t been constant with the coming of the coronavirus that contributed to a number of factors and lowered demand for products.
He advices his fellow youth to exercise patience, persistent and appreciate the opportunities and challenges that are in running businesses. During his operations in Area 23, he said he has been able to work with 9 young men that he has trained and have grown from his business to establish their own businesses who are originally from his home district of Rumphi. Going forward he said he will be expanding his business to have a wide range of steel products like steel furniture.
Kondwani Majiyaheni operates a business that is registered and contributes to the growing Malawi’s economy through tax paying.