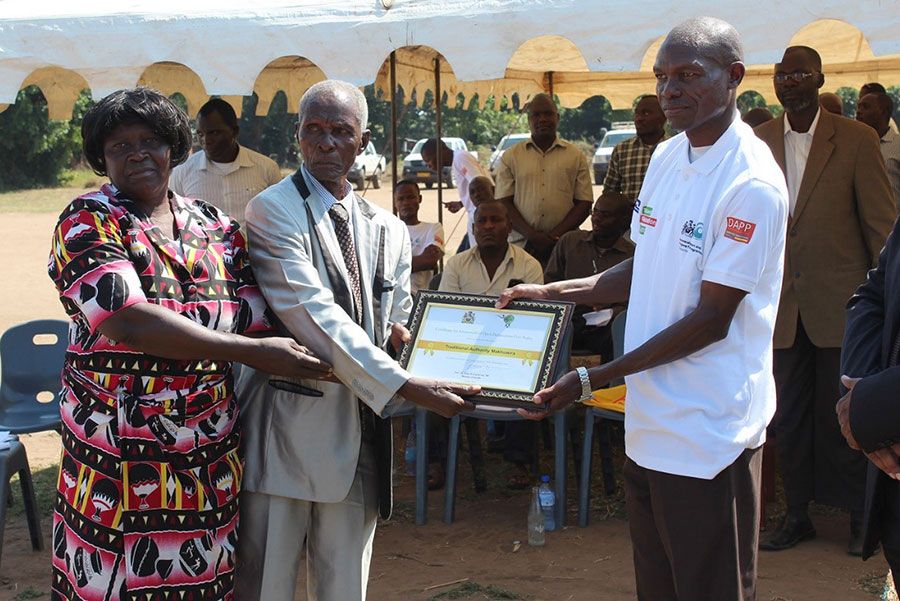 DAPP Malawi in partnership with the Malawi Governmaent, with financial assistance from the Global Sanitation Funds via the Water Supply & Sanitation Collaborative Council and Plan International Malawi has for the past 6 years been implementing the Accelerated Sanitation and Hygiene Practices Programme (ASHPP). During this period, DAPP supported the district council to implement sanitation innervations for Traditional Authority Mulilima to attain Open Defecation Free status. The project has supported T/A Makhuwira to achieve a similar goal, the ODF celebration for T/A Makhuwira was held on 12th May and was presided over by Mr. Beston Chisamile the Chief Director for Administration in the Ministry of Health representing the Minister.
During his remarks, Mr. Chisamile indicated that the Open Defecation Free (ODF) programs being championed in various districts of the country are helpful as they promote a health living development among people in the country. Mr. Chisamile said when a T/A is declared ODF, there is promotion of sanitation and hygiene which saw an advantage where the people of a particular area having toilets to use and this in-tells that there is a reduction in water borne related diseases. He however said government was in the process of recruiting 600 health workers to ease shortage of staff in public facilities.

On his part, Thoko Kaitane, who is in-charge of WASH programs at Plan Malawi said the ODF activities were yielding positive results citing that Chikwawa is one of the districts affected by climatic challenges but with the movement that has been going on about sanitation it was very clear that there was a significant reduction in water borne diseases.

Amakhosi Jere, Senior Grants Administration Specialist at DAPP which also helped T/A Mulilima to be declared ODF said they worked had to ensure that the areas in which they worked in were declared ODF and that they (areas) were able to sustain ODF. He said there was a need for development partners to be able to feedback to government the progress undertaken in their fields of work so that government was able to address issues of concern among the people.

On declaring his area Open Defecation Free T/A Makhuwira said he will ensure that all his subjects were following good hygiene in order to prevent water borne diseases. He also asked government to expand Makhuwira Health Centre which he said was too small to serve people from three districts of Chikwawa, Thyolo and Nsanje on top of ensuring that drugs were available at the facility. Chief Makhuwira further explained that the poor road network from Thabwa to his area poses a serious threat to pregnant mothers that were referred to receive further treatment at the district hospital.

Makhuwira area which has a population of 77, 443 becomes the fifth to be declared ODF in the district alongside Mulilima, Chapananga, Masache and Ngowe. So far, 46 TAs out of 263 have been declared ODF in an ongoing sanitation and hygiene program in the country.