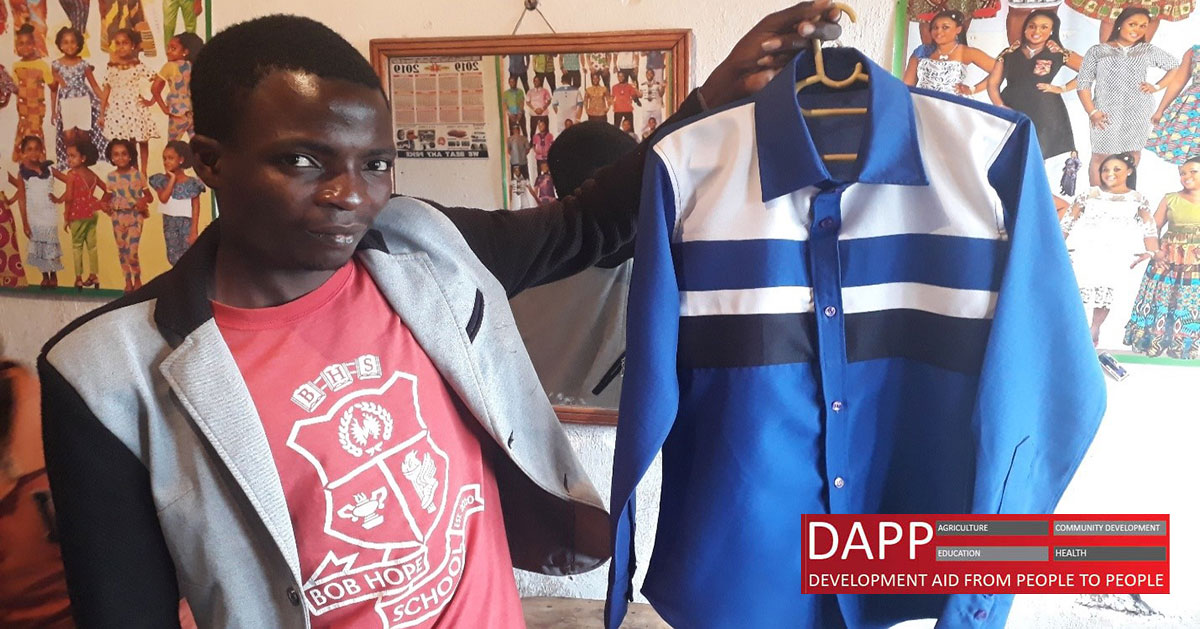 Owen Mchocho is a Malawian born on 6th March 1994. He comes from Chinyama village in Mulanje district. Owen grew up in his home village and upon completion of his secondary school he enrolled with DAPP Malawi’s Mikolongwe Vocational School (MVS) for a 6 months tailoring course.

Owen went straight into business and setup a shop in Chigumula Township in the commercial city of Blantyre soon after completion of the course. The shop was opened together with a fellow graduate from the institution, James Chagunda with the start-up tools supplied by DAPP. Owen’s colleague, James, went on to open a shop of his own after buying a sewing machine.

Owen made extensive savings from his business for about 6 months and bought 3 sewing machines on top of the one he already had. He now runs 2 shops, 1 in Chigumula Township and the other in Mulanje his home town. He rents out the other 2 sewing machines to tailors within Blantyre district at a fee. Owen has since employed 2 permanent tailors for his 2 shops. He also produces tomatoes and vegetables, the tailoring course had an Agricultural element of backyard gardening. Owen has hence diverse income paths from his garden, machine rentals as well as from his 2 shops. In his home town Mulanje, he does also offer lessons at a fee to those who would want to become tailors and fashion designers.
Owen says during normal months he has been making more than MK200, 000.00 (more than 240 Euros). This is a computation from the MK120, 000.00 a month (MK60, 000.00 per month for each machine rental or MK15, 000.00 per week) and an average of MK60, 000.00 for his 2 shops in Chigumula and Mulanje. “I earn more than MK200, 000.00 per month exclusive of gardening proceeds which I realize after harvesting normally at 2 to 3 months’ intervals,” Owen further narrated.

With knowledge gained from DAPP Mikolongwe Vocational School (MVS), Owen does not only support his family in everything but is also an employer of 2 community members. He also supports his 2 siblings with school fees while also paying his employees as well as shop rentals.