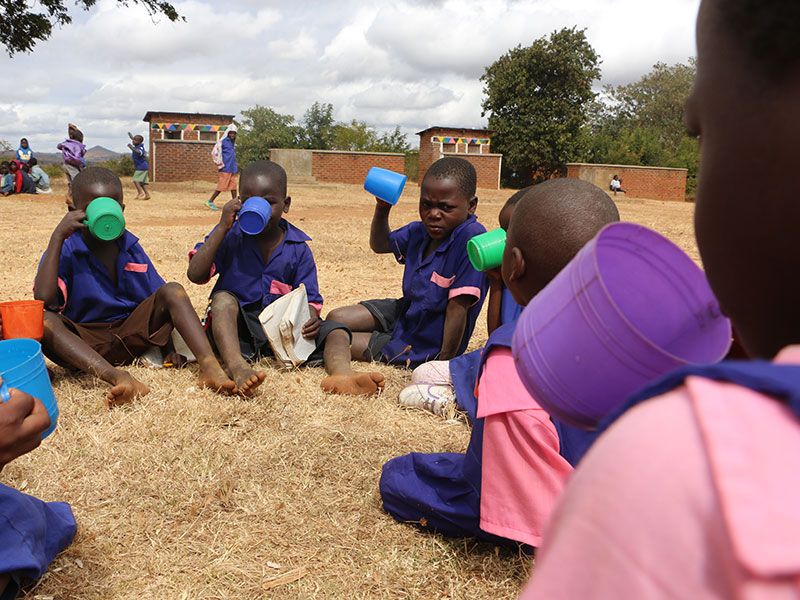 Nutrition activities in schools of Malawi make a big difference both on reducing malnutrition, promoting children’s development and getting children to stay in school.
8 million Malawians are estimated to face hunger in 2016/2017 season. The food crisis has a direct effect to education of children and young girls from poor households.
According to UNICEF Malawi, there has unfortunately been no change in children's nutritional status since 1992 and malnutrition rates remain unacceptably high with about 46 percent of children under-five year olds stunted, 21 percent underweight, and four percent wasted. Micronutrient deficiencies are common. The unfortunate conditions have a strong effect on children’s participation in education and on how much they learn when they are in school.
It is apparent, therefore that the situation is likely going to increase school dropouts as children will focus on their stomach rather than studies and even the poor families will find little importance to send their children to school.
However, there is a ray of hope among teachers at Mzumazi Primary School in Lilongwe rural that the effects of hunger will be responded to by the DAPP Malawi project Let Children Stay in School supported by the Roger Federer Foundation. The project among other initiatives encouraged the school to cultivate soya for a school feeding programme, targeting pupils in junior classes.
“We were given 20 kgs of soya bean seeds and we have harvested 3 bags of soya beans each weighing 75 kgs.” said Felix Phiri, one of the teachers at Mzumazi Primary School.
“We are expecting that once learners start eating food here at school they will enjoy learning and at the same time this will assist us in reducing absenteeism of learners and they will have improved learning, because once one has taken food it is easy to learn.”
This daily meal provision at the school will provide a strong incentive to parents to send their children to school and keep them there and it will help pupils to focus on studies at the same time.
In this year of hunger, this school meal programme is going to give a regular and nutritious meal to children from Mzumazi School.
School based feeding activity form part of the many elements which “Let the Children Stay in School project” is contributing to improving the quality of teaching in the primary schools of Malawi. The establishment of school feeding for the children is also being carried out through mobilisation of the parents around the school to produce for the sustainability of the daily meals.
The project is building capacity of 600 primary school teachers in a total 114 primary schools and reaches approximately 50,000 children attending standards 1 to 2 of their primary school education over a period of 3 years. Most importantly, the project is expected to reduce dropout rate for children attending primary school in the designated districts.