The aim of the Child Aid Project in Chikwawa districts was to improve the life of the children and their families by mobilizing, organizing and training the community on how to improve their own sanitation and living conditions. The project targeted to reach 146,272 people living in 253 villages and 23 primary schools in Traditional Authority (T/A) Makhuwila, Mulilima, Ngabu and Paramount Chief Lundu.
The Child Aid project in Chikwawa was being implemented in Traditional Authorities Mulilima and Ngabu and Paramount Chief Lundu. The project’s first funding cycle was from July 2012 to 31st December 2015 and was extended from February 2016 to end on 31st March 2017.
The project continued working with post Open Defecation Free (ODF) activities in T/A Lundu and Ngabu and Mulilima and expand into new T/A Makhwiira in Chikwawa district from February 2016 to March 2017. In April 2017, T/A Makhuwiira was declared Open Defecation Free by the National ODF Task Force and celebrations to mark the achievement were held in the area.
The main funding partner of the project was Plan International Malawi. 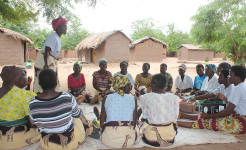 Fighting Gender Based Violence through Savings Clubs An innovative concept of village based savings clubs has seen DAPP Malawi empower rural women in the Southern Region of Malawi in fighting gender based violence. The costs of gender-based violence are… Improved sanitation in more than 1,500 villages

The standard of living for thousands for people in districts of Thyolo, Chiradzulu, Blantyre and Chikhwawa district are set to improve for the better as DAPP Malawi in partnership with PLAN and UNICEF is mobilising communities to make and use latrines.DAPP…