The aim of the Child Aid Project in Machinga districts was to improve the life of the children and their families by mobilizing, organizing and training the community on how to improve their own sanitation and living conditions. The project reached 284, 721 people living in 652 villages and within five Traditional Authorities (T/A) of Mlomba, Liwonde, Nsanama, Chamba and Nkula where the project was being implemented.
By December 2018, the project had moved all the 5 T/As to an Open Defecation Free status. The T/As were declared ODF by the National ODF taskforce following a verification exercise conducted by the Machinga district’s Sanitation and Hygiene department.
The project’s fund was implemented with funding from the DAPP Social Development Fund running from 2016 to December 2018. 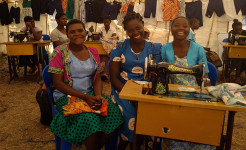 Mary Gogoda, Yamikani Office and Lusina Benda are among 31 young women and girls who are undergoing a four-month tailoring training at Neno Youth Centre in Neno district. The training also known as Mobile training is a four-month program being run by…

Owen Mchocho is a Malawian born on 6th March 1994. He comes from Chinyama village in Mulanje district. Owen grew up in his home village and upon completion of his secondary school he enrolled with DAPP Malawi’s Mikolongwe Vocational School (MVS) for a 6…